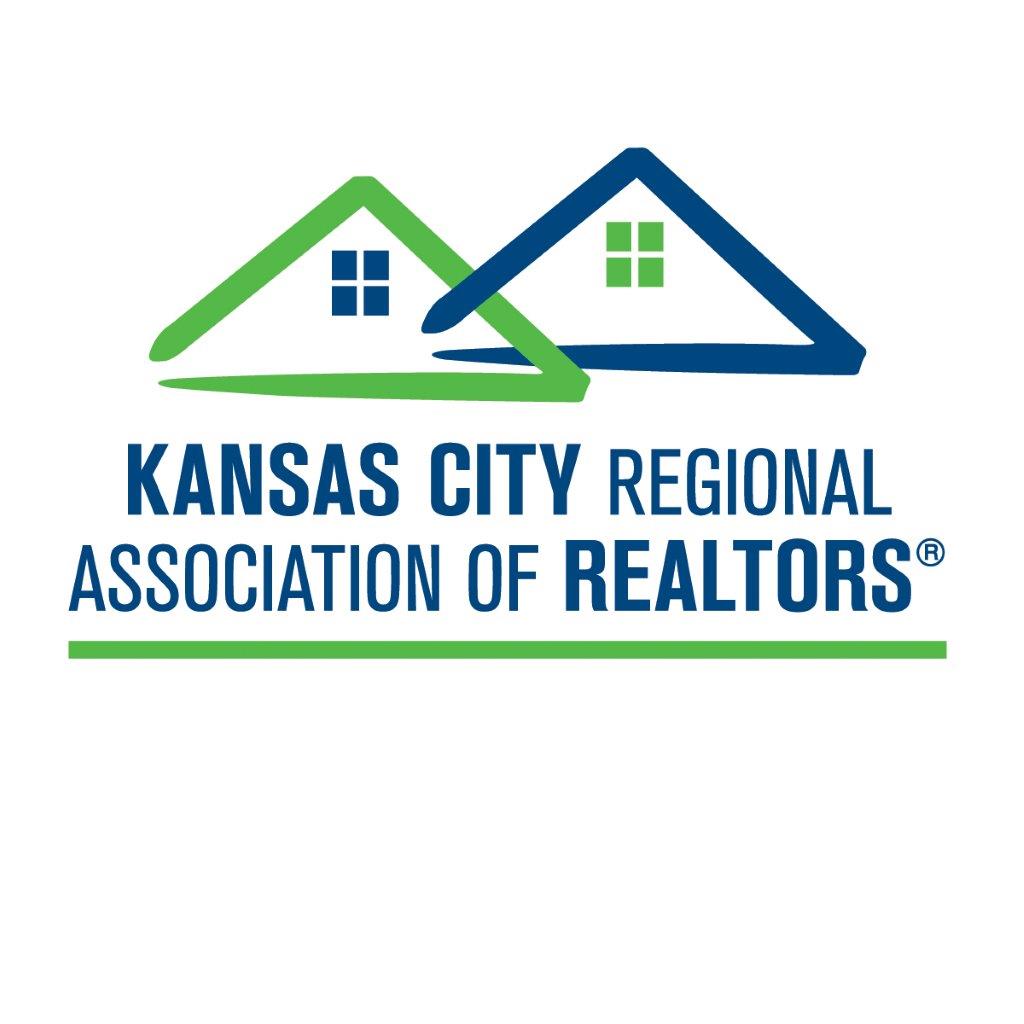 With inventory down and sales prices up, this can be a great time to sell your home in Kansas City! According to a September 2014 report from the Kansas City Regional Association of REALTORS, the inventory of combined new and existing homes last month was 12,228 – that’s 4% lower than it was in September 2013! And the average sales price for new and existing homes combined was $192,335, representing a 4.8% increase over the same time last year.

Both of these can be good news for sellers! If you are considering selling your home, call me at (913) 980-2434. I can pull a comprehensive market report for your area to help determine an effective selling plan for your home. From getting your home in the best condition for marketing, to working with a professional stager and photographer, I have the resources to list your home quickly and support it with a variety of marketing tools.

Other highlights from the September 2014 report include:

August at a Glance

If you have been contemplating a move, now may be the right time! According to the regional market report just released by the Kansas City Regional Association of REALTORS for August 2014, inventory is still low in our market. In fact, the inventory of combined new and existing homes last month was 12,544 – that’s 2% lower than it was the same time last year!

I can say that I am experiencing this with buyers I am working with. While inventory was low throughout the summer, we still continued to see new listings coming on the market. However, more recently it seems the number of new listings has slowed down, providing fewer new-to-market homes to tour. What does this mean for you? If you have a home to sell, the market conditions make it an appealing time to list!

If you have been on the fence about listing your home, give me a call at (913) 980-2434. I would be happy to meet with you and share a comprehensive market report of your area and provide a marketing plan to get your home on the market as soon as possible.

Other highlights from the August 2014 report include: 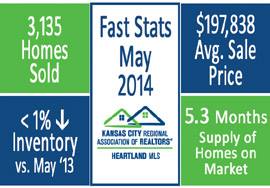 If house-hunting is on your list for the weekend, take a quick look at the most-recent market report from the Kansas City Regional Association of Realtors before you head out. This market overview can provide you with a good sense of the residential real estate market around the metropolitan area. Here are a few highlights from the May 2014 report:

The bullets above cover the broader group of combined home (new and existing) statistics. If you’re interested in learning about existing home or new home figures separately, the report provides that as well.

The supply for combined new and existing homes in May 2014 was 5.3 months. This represents a balanced combined home market. This calculation is determined by taking the inventory and dividing it by the 12 month average of the number of sales. In general, when this figure falls between 5 months and 6 months, it equates to a balanced market. When it exceeds 6 months, the market favors buyers; and when it is under 5 months, it tends to favor sellers.

If you would like market data on a neighborhood you are interested in, or on your current neighborhood to help determine a listing price for your home, give me a call at (913) 980-2434 – I would love to help you!

Last week I received a copy of the February 2014 Kansas City Housing Market Report from the Kansas City Regional Association of REALTORS and Heartland Multiple Listing Service. Sellers (and potential sellers), this report had some good news for you!! Last month the average sales price for new and existing homes combined was $167,496 – this is 3% higher than the same time last year!

With spring approaching and new listings hitting the market, February was a busy month for our team. We booked more than $3M in sales in February 2014!

February by the Numbers 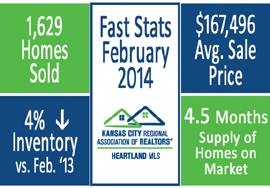 For February 2014, the supply of new and existing homes was 4.5 months. This is lower than February 2013 (5.1 months) and represents a seller’s combined home market.

We are now entering what is traditionally the busiest time of year for residential real estate in the Kansas City area. If you have been on the fence about buying or selling, this is a great time to make that move! Though rates have increased over the past year, they are still historically low, and predicted to continue to rise.

The KC real estate market had a strong end of the year. According to a recent report from The Kansas City Regional Association of REALTORS & Heartland MLS, prices were up about 9% from December 2012 to December 2013, with the average price for an existing home sale at $172,976. The average new home price in December 2013 was $357,330.

While December is traditionally a slower month for real estate because of the holidays, we still saw some growth in sales in the Kansas City market. Combined home sales (new and existing) for December 2013 totaled 2,064. This was 1% higher than December 2012.

If you are considering a move but want to learn more about the area where you plan to sell or want to buy, give me a call at (913) 980-2434. I would be happy to pull comparative market data and discuss a plan for listing and/or buying!